Harvest of the Sea

Harvest of the Sea 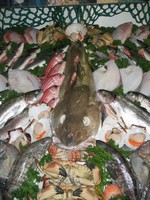 It’s very doubtful whether anyone fishing with a rod or line from London Bridge these days is likely to catch any fish but at least we know the River Thames is much cleaner and fresher than it was in Victorian times. It certainly wouldn’t be as bad as it was on one occasion in the mid 19th century when the smell and state of the river was so vile that it forced Members of Parliament out of the chamber.

London now has one of the world’s cleanest urban rivers and although it no longer supports shoals of fish as it did in Roman times, the river’s bounty over the century is remembered annually in the Harvest of the Sea ceremony at St Mary’s at Hill, the church which has strong links with the old fishing industry of London and, in particular, the Billingsgate fish market.

That moved away from the Pool of London in 1982 and was re-sited in modern premises on the Isle of Docks. It’s business-as-usual in the shadows of the Docklands skyscrapers but the Harvest of the Sea which takes place this year on Sunday, 13th October at 11.00 is a reminder of the days when white-coated, flat-hatted porters with boxes of fish balanced on their heads, the noise of wheeled carts rattling on the cobbled streets and shouting of traders and auctioneers were very much part of life in this part of the City.

Yet again London’s past is celebrated by a traditional ceremony, one of many that remind us that the City has undergone so many changes over the centuries. The fish market dates back to the 1327 when King Edward III granted a charter which prohibited any rival market being set up within 6.6 miles That was calculated to be the distance that anyone could be expected to walk to market, sell his produce and return in a day.

The Billingsgate Market building on the banks of the Thames designed by City architect Sir Horace Jones and opened in 1876 is now valued as a conference venue and exhibition centre. It has an important role in the life of a modern city but the memories when this area was one of London’s great markets are as strong as ever. These customs and traditions have not been completely consigned to the visitor guides and history books.

Why not go along to St. Mary at Hill on Sunday, 13th October to relive those memories.