The Shadow of the Shard

The Shadow of the Shard 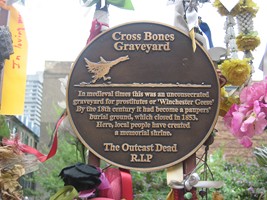 The story goes that Renzo Piano sketched the Shard on the back of a menu in a Berlin restaurant in 2000. Now it’s with us, a towering symbol of progress on London’s changing skyline – but hold on a minute. Maybe we should pause and consider life for the people of Southwark 150 years ago. They were only concerned about survival not progress. Poverty, squalor, disease and crime overshadowed the lives of thousands who were struggling to survive in an area that was one of the most deprived in Britain.

It left its mark on the young Charles Dickens during the time he was visiting his father in the debtors’ prison at the Marshalsea just off Borough High Street.

It shocked Octavia Hill who was determined to provide better homes for desperate parents with young children, the aged and infirm many of whom were just a step away from the workhouse.

It was the last resting place for hundreds of paupers and prostitutes whose bodies were dumped in shallow graves on unconsecrated ground.

It was a fortune-making opportunity for the railway entrepreneurs who ruthlessly destroyed homes and workshops to create new railways, sidings and stations around London Bridge.

Time cannot erase the stories of poverty that exist in the SHADOW OF THE SHARD. The drooping linen flowers tied to the railings of the Cross Bones graveyard; the green landscaped area that was once the site of Mint Street Workhouse; the high brick wall which is the only remnant of the Marshalsea Prison; the street names – Quilp, Clennam, Copperfield, Little Dorritt and Doyce – which remind us how the young Charles Dickens used his experiences to create characters and places in his novels.

The SHADOW OF THE SHARD is a walk that begins with head-turning and neck-stretching to take in all the latest architectural wonders of London. Two hours later you will be reflecting on another era when Britain – and London – were famed for their power and influence yet, at the same time, thousands were dying of cholera. In one year alone (1877), half of the recorded 1206 deaths in Southwark were young children and babies.

Think about that when you pay almost £25 next year to go up to the 72nd floor of the Shard to look out across 21st century London. For that amount, a Victorian family could have rented a two-room home in Southwark for a year.