The Only Way is Essex

The Only Way is Essex 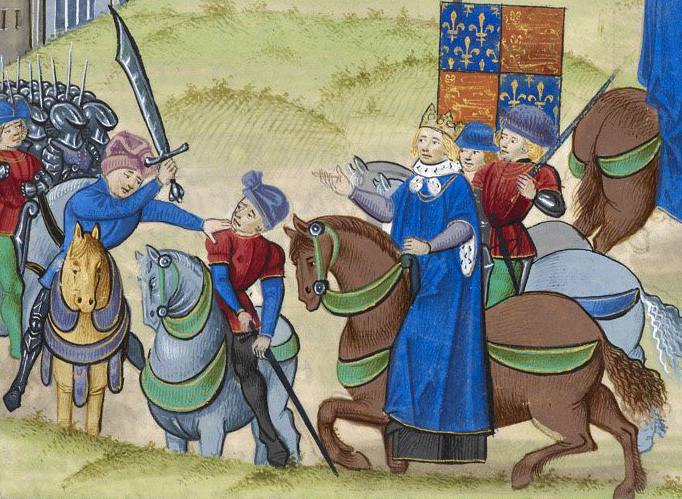 Wat Tyler has never had a good press but at this time of the year he deserves a bit more coverage. Alright, so it was on 15th June 1381 that he was snuffed out by the Lord Mayor of London, Sir William Walworth, during a heated protest meeting in Smithfield but maybe this up-front Essex lad should be remembered for the cause he represented rather than the murders and criminal activity which earned the Peasants’ Revolt a prominent place in history.

There is some doubt about whether Tyler came from Essex although he certainly went to Kent and inspired the peasants to march on London as a protest against their stifling working and living conditions and the infamous Poll Tax. After the Black Death of 1348-50 had decimated the population of England and the continent, the labour shortage threatened the long-established power of the landowners. Now the serfs had a chance to hit back against the oppressive aristocracy and land-owning classes – which is exactly what they did.

It was a bloody and terrifying uprising which moved from the villages of Kent and Essex to the streets of London. Wat Tyler with Jack Straw and John Ball led thousands of rioters into the City and demanded a meeting with young King Richard II and his nobles and lords. They demanded concessions and were intoxicated with their power but in the end it was to be their downfall.

Tyler was just a bit too loud-mouthed and aggressive for his own good. At a big and what he thought would be a triumphal meeting in Smithfield, Tyler appears to have disregarded the King’s status and acted with contemptuous arrogance. It was too too much for Walworth. He lunged in with his dagger and Tyler was mortally wounded. The rioters were stunned and the King’s superiority was restored. The Peasants’ Revolt ended with the land-owners and the aristocracy firmly in control.

The dagger that killed Wat Tyler can now be seen in a display case at the Worshipful Company of Fishmongers on London Bridge while Essex has honoured its mediaeval revolutionary with a Thameside park named after him near Grays. Yet although Tyler is remembered for leading such a brutal and ill-fated uprising most historians now agree that this was the beginning of the end of serfdom.