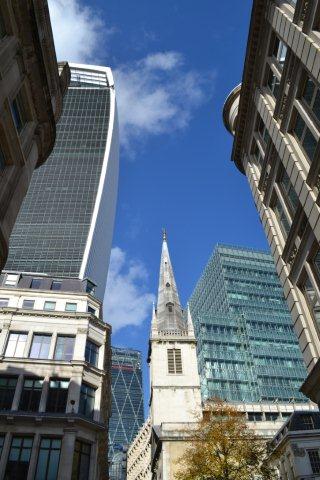 How can we judge the genius of Sir Christopher Wren when the evidence of his talent and architectural skills is increasingly overshadowed by the modern office blocks which are changing the City skyline? The answer is straightforward enough. Just stop and take a minute or two to admire the churches he designed and re-built which have survived over 300 years.

Wren could feel proud of himself if he were around today to see St Margaret Pattens surrounded by the Walkie-Talkie on one side and Minister Court on the other. The church with its spire reaching above the tower is dwarfed by its neighbours – but only in size. Wren wanted to restore the impressive skyline of late 17th century London and he came up with a brilliant array of imaginative and innovative towers, spires and steeples for the 51 churches that had to be re-built after 87 were destroyed in the Great Fire.

This was an opportunity to enhance the capital and create something new and memorable. His plans to completely re-structure the city with a new grid pattern of roads was quickly dismissed. London needed to be re-built as quickly as possible and there wasn’t the time or enthusiasm to adopt some of the ambitious architectural schemes that he was proposing.

Wren was not prepared to be a yes man to the Monarch, Charles II or others in Parliament who were nervous of unrest or even an uprising if the City remained derelict and desperate for too long. The people wanted action; Wren, however, was not going to comprise his vision to see a bold, proud city rise from the ashes and just waited until the furore died down before gradually getting his own way.

Over the years that followed, his determination paid off. St Paul’s Cathedral, completed in the early 18th century is a magnificent example of his talents and very much the building he wanted to see with its stunning dome which many didn’t believe could be constructed. His designs for the new churches that emerged, including St. Margaret Pattens, continue to be admired. No two Wren churches are the same; they are proud symbols of a time when London was recovering from the ravages of that dreadful fire. With its elegant spire and a spacious and welcoming interior, St Margaret Pattens reminds us that Sir Christopher Wren deserves his place in history as one of greatest, most talented and imaginative Englishmen who have ever lived.