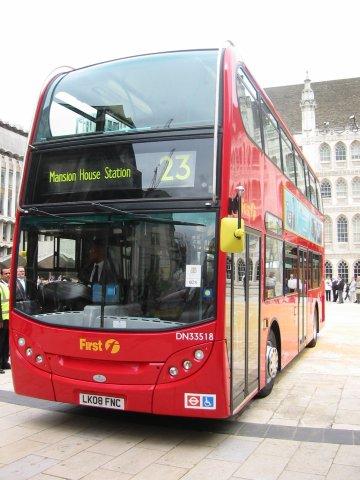 It’s a privilege to walk and explore the streets of this great capital but on these damp, dreary November days taking a bus can be an adventure. So my recent late afternoon journey from Fenchurch Street in the City to Barking Station on numbers 40, 115, 474 and 366 was an opportunity to share the experience with the Oyster-card army of East London.

I waited for the number 40 from Dulwich to Aldgate, thinking back to the time, 50 years ago, when this route went all the way to Wanstead before turning round. As a schoolboy, I was familiar with the 101, the 66 (to Romford) the 167 (from Buckhurst Hill to school in Roding Lane) and the dear old no 10 which still runs along Hermon Hill and on to South Woodford. Today the buses may be sleek, eco-friendly and relatively comfortable but many still travel the same route and, thankfully, are not multi-coloured advertising hoardings on four wheels. Nostalgia for the red London bus? You bet!

At Aldgate I waited in the rain for the 115 with a collection of people with push-chairs and shopping bags who were clearly regular travellers and knew where they wanted to go. No chatting amongst any of us; it was too damp and cold for that; the only muffled sound which occasionally rose above the traffic noise was from those using mobile phones. I knew at some stage of this journey there would be someone talking incessantly in some language that was unrecognisable. Hope they don’t sit next to me!

The traffic was moving slowly; inconsiderate drivers had parked white vans in the bus lane as they unloaded boxes of toys and textiles for the shops down the Commercial Road. The traffic lights always seemed to change from green to red as the bus approached. It was a stop-start journey punctuated by a moaning child and schoolchildren managing to laugh and giggle while swinging on the hand-straps. Is physical education no longer on the school curriculum? These are the delights of a bus journey – wrong choice of word – although it is considerably more uncomfortable being squeezed alongside sweaty bodies on a rush-tour tube train. I feel the grumpy-old man syndrome taking over!.

Canning Town Bus interchange was reached 45 minutes later and that’s where I had to switch to the 474. . The transport links in this part of London have been considerably improved with the expansion of the DLR (Docklands Light Railway) and the bus station was far more civilised than the old bus stops on the street. There is a waiting room for passengers and a Transport to London official guided me to gate D where the 474 soon came along.

It was almost empty and, joy of joys, I was able to go upstairs and sit in the front seat. Now I really was on a journey to the brave new world. The 474 went into the heart of old docklands stopping at the London City Airport, on through large areas of undeveloped industrial land, then to North Woolwich and the old ferry crossing and alongside the floodlit workings of the new Crossrail project due to open in 2018. It was difficult to imagine this part of East London was once one of the largest and busiest port complexes in the World.

At Cyprus, one of the DLR stations on the Beckton-Tower Gateway route, I left the 474 to continue its journey and went to the new University of East London, built on the edge of the Royal Docks and overlooking the runway for the airport. Can anyone tell me the logic building a place of study and quiet contemplation alongside a busy runway with aircraft taking off and landing every few minutes?

After a couple of hours, a visit to the library (there goes another BA aircraft!) and refreshed by a visit to Costa Coffee it was time to get the 366 going to Barking Station. The old dock warehouses have been replaced by windowless, distribution and storage centres larger than football pitches and retail parks with the usual residents – Tesco, Next, Carphone Warehouse, Nandos, MacDonalds… need I continue? Lights blazing late into the evening; vast car parks filling up and passengers staggering aboard with their plastic bags full of bargains – or so-called necessities. And talking, talking, talking into their mobiles!

The 366, the only single-decker on this trip, wisely avoided the busy main A 13 route between South Essex and the City. The bus went over and under this traffic artery before closing in on Barking. By now there were less people on board and we didn’t stop if no-one was waiting or wanting to get off. By the time I arrived to catch the train at Barking, the total time for this roundabout bus adventure had taken just under two hours, The train journey from Fenchurch Street to Barking is 14 minutes but, if you have got the time and don’t find the experience too exasperating, riding on the red London buses does have a strange kind of nostalgic charm.