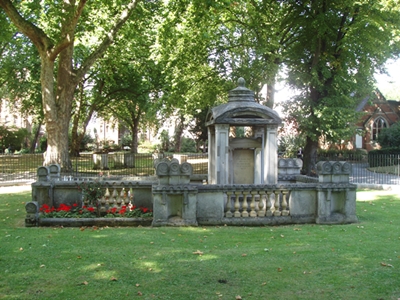 The link between those iconic red telephone boxes in cities, towns and villages throughout Britain and the reputation of the Georgian architect Sir John Soane is worth remembering on this day, 20th January 2015. It is the date of his death in 1837 but that was a long time before the telephone was invented.

A visit to Soane family tomb in the churchyard of St. Pancras Old Church close to the Eurostar Terminal will provide the answer. Designed by Sir John when his wife died in 1815, it bears the touching inscription “The burial of all that is dear to me in this world and all that I wished to live for”. John was buried alongside his wife when he died 22 years later.

It was the design of the tomb that caught the imagination of another architect over a century later, Sir Giles Gilbert Scott. At the time Scott was a trustee of the Sir John Soane Museum in Lincoln’s Inn Fields and used the main feature on the Soane tomb when invited to submit his design ideas for a telephone box. It was an inspired decision by Scott and led to what became known as the K2 and K6 red telephone boxes and a Grade II listing as notable architectural contributions.

Soane, who was admired for the many neo-classical buildings he designed, including the Bank of England, now rests in a peaceful churchyard which has links with two other great figures in British history, the philanthropist Angela Burdett-Coutts and the author Thomas Hardy. A red telephone box is nearby.