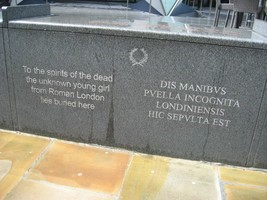 As the new office blocks currently going up re-shape the City skyline, it is worth reflecting on those who in past centuries have, in their own way, been a part of London’s remarkable 2000-year rise to prominence.

Only a fraction of them appear in history books but that doesn’t mean we should forget them. Many have contributed in some way to the wealth, influence and reputation of the City. Millions have lived, worked and died in the capital sometimes in poverty and squalor to be consigned to a pauper’s grave or plague pit.

Close to the towering Gherkin in Bury Street is an inscription which should remind us that everyone in some way or other, no matter how minimal, must have made some contribution. Simple words but they acknowledge what has gone before.