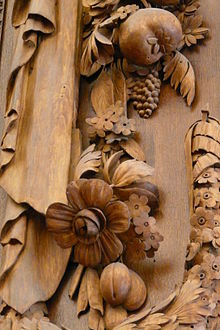 I caught up with Grinling Gibbons in Oxford this week – or should I say that it was his remarkable lime and pearwood reredos at the Chapel of Trinity College that confirmed for me that this was a man who made such an important contribution to the rebuilding of the City of London after the Great Fire in 1666.

Gibbons was 19 when he came to England from the Netherlands and soon after was spotted working by candlelight in a Deptford cottage by the diarist John Evelyn. At the time, Sir Christopher Wren was gathering together some of the best craftsmen he could find as he set about rebuilding many of the City churches that had been destroyed. Gibbons was a sensation and soon he was earning commissions from the rich and famous including Charles II who was one of his patrons.

The ‘cascade’ of flowers, fruits and animals on altar screens are the trademark style of Gibbons. His intricate and detailed carvings can still be seen in churches and stately homes around England. And you can step inside some City churches notably All-Hallows-by-the-Tower and St Mary Abchurch, to admire the intricacy and detail of his work at closehand.

Gibbons, who had 12 children, was appointed Master Carver to William III. He died in 1720 and is buried close to some of his greatest work – in St. Paul’s Cathedral.