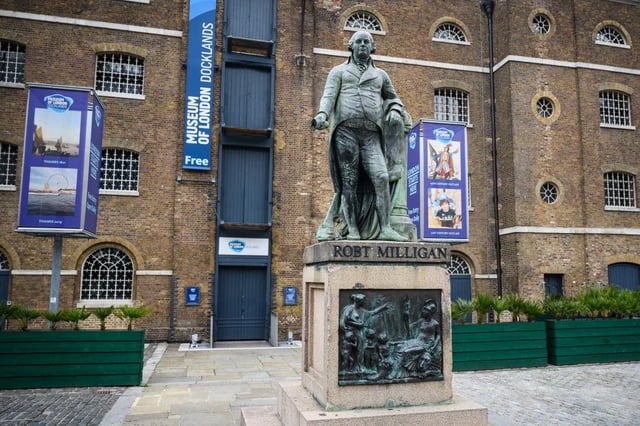 Those who have been on my Docklands and Limehouse walks know that we finish outside the Museum of Dockland before being revitalised by a pint and a curry special in the next door Wetherspoon pub, The Ledger Building.   The walk has always ended on a controversial note as I explain why the statue of  Robert Milligan does not deserve to be in such a prominent position in Docklands. Today it is no longer there; it was quietly taken away and put in store inside the Museum.

This man was a prominent slave trader, prosperous and influential and a leading figure in the West India Company.  Like many merchants, aristocrats, land-owners and politicians, his wealth accumulated through the ownership of slaves and investment in the trade of shipping manufactured quality goods from this country to West Africa, then transporting slaves to the Caribbean and the Americas and  returning with sugar, cotton, spices, rum and many other valued products to land them at Bristol, Liverpool and, of course London.

Criminal activity on the River Thames was threatening this trade so Milligan promoted the construction of the West India Docks in the early 19th century.  This walled complex of docks and warehouses offered security to the ship owners and merchants – and Milligan is remembered for this important contribution to the expanding NewWorld trade which was almost too much for the old and chaotic quayside facilities to handle.

But Milligan’s reputation as a slave trader has, until now, been conveniently. overshadowed and maybe would have stayed that way until ‘Black Lives Matter’ movement hit the headlines some weeks ago.  Throughout much of the 18th and into the 19th centuries, much of the wealth  wealth generated by investment in slave trading was being used for ‘good causes’.

When Edward Colston’s statue was unceremoniously pulled down in Bristol, attention focused on the impact on other slave traders who had been ‘honoured’ in various parts of Britain for  political, philanthropic and educational contributions to their towns and cities. No one questioned the morality of the situation.

Some commentators claimed this represented historical erasure. Others argued that honouring a major slave trader with such a monument is morally indefensible, pointing out the crucial distinction between public monuments — which offer little or no context, and simply glorify the subject — and museum exhibitions, for example, which can educate visitors on a historical figure or era without honouring it.

Now the City of London is taking this a step further.  The City  is organising a consultation asking people to comment on what approach should be adopted to links with slavery and historic racism — with the opportunity to suggest different courses of action. Other boroughs in London have launched similar initiatives.

Monuments  in the City include a statue of William Beckford that stands in the Guildhall alongside Admiral Lord Nelson, Winston Churchill and the Duke of Wellington.. Beckford was  twice Lord Mayor of London and his  inherited wealth was generated by slave labour on over 22,000 acres of Jamaican sugar plantations.

The consultation will also take into account streets and buildings named after slaveholders inviting suggestions on what should be done about these landmarks. Do we leave them as they are, reinterpreting them visually, or move them elsewhere?

These unpalatable reminders of a long, grim and painful period of British history have to be re-appraised in the context of time.  Tell their story truthfully, and that of the millions who suffered and died; move the statues; reveal more information but do not glorify the merchants, ship owners, politicians,  titled individuals and others who were involved in this abhorrent trade.  In the 21st century we are all making history.  Our past matters whether it was yesterday, last year or last century.